Our hackerspace had purchased a Kossel Clear Delta Printer.  In retrospect, it seemed like it was a forever project getting the printer assembled and operational.  For months, it was in the box in the back room with lots of talk about putting it together but no action.  One of our senior members, Andrew, had finally had enough.  He grabbed the kit and spread it out on the table in the front room of our space.

Well, once the pieces were just laying out there, it was sort of like a jigsaw puzzle just asking to be put together.  Like moths drawn to a flame, hackerspace members contributed and we got it assembled over the course of a couple of weeks.   Actually, in hindsight, it’s somewhat amusing.  We have our open nights on Thursdays and we frequently have guests come in to check out the space.  It seems like they couldn’t resist the jigsaw puzzle effect either.  Everyone enjoyed the assembly process.

Unfortunately during the timeframe we were assembling the Kossel, there was some major cleaning/rearranging taking place due to  renovations in our back room which caused things to be moved around the space.  The Kossel was basically done less the extruder which was in a box along with the laser cut outs.   The extruder portion of the kit had basically vanished. (We surmised that scrap cutouts from the kit were in its box, so it might have been inadvertently thrown out with the trash).

We debated what to do.  Did we actually get the extruder portion with the kit? (Yes. I remember laying hands on the pressure fittings, so it did come with the kit)   So do we order a replacement kit?  What?!  No!  We’re hackers/makers! We’ll make a new and better one!

One of workshop 88’s friends, Ryan who periodically visits and has a Kossel Clear, suggested we try out http://www.thingiverse.com/thing:245677 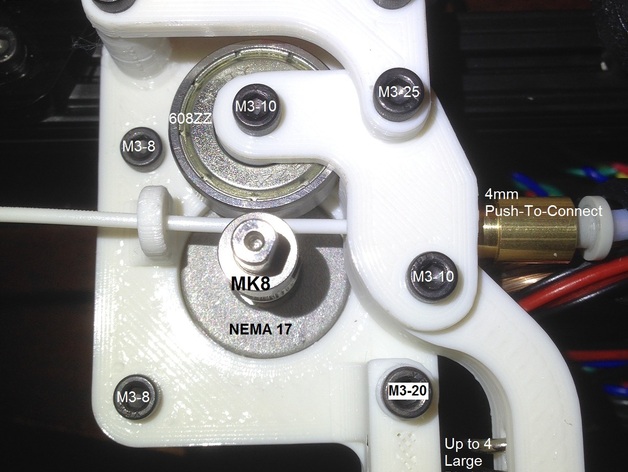 This is actually a very clever design; it uses part of a paper clamp (binder clip) to tension the bearing against a hobbed gear.

There a couple of minor features in this design that I thought could be improved on.  I’ve seen Bowden-style extruders where there is a pressure fitting mounted on the input side of the extruder (The Kossel Clear extruder we misplaced had that feature).  Having a PTFE tube on the input side offers lots of options on how to route the filament of the extruder.  In addition, it seems like the post that supported the bolts to the Misumi 1515 frame could have could have been beefed up a bit as well.

The thingiverse file only included the STL’s, which I loaded into Freecad.  Below is the original base as part of assembly. Display properties of the original files where transparent so it was easy to wrap a new solid model with the same proportions over the original model with the new features I wanted. 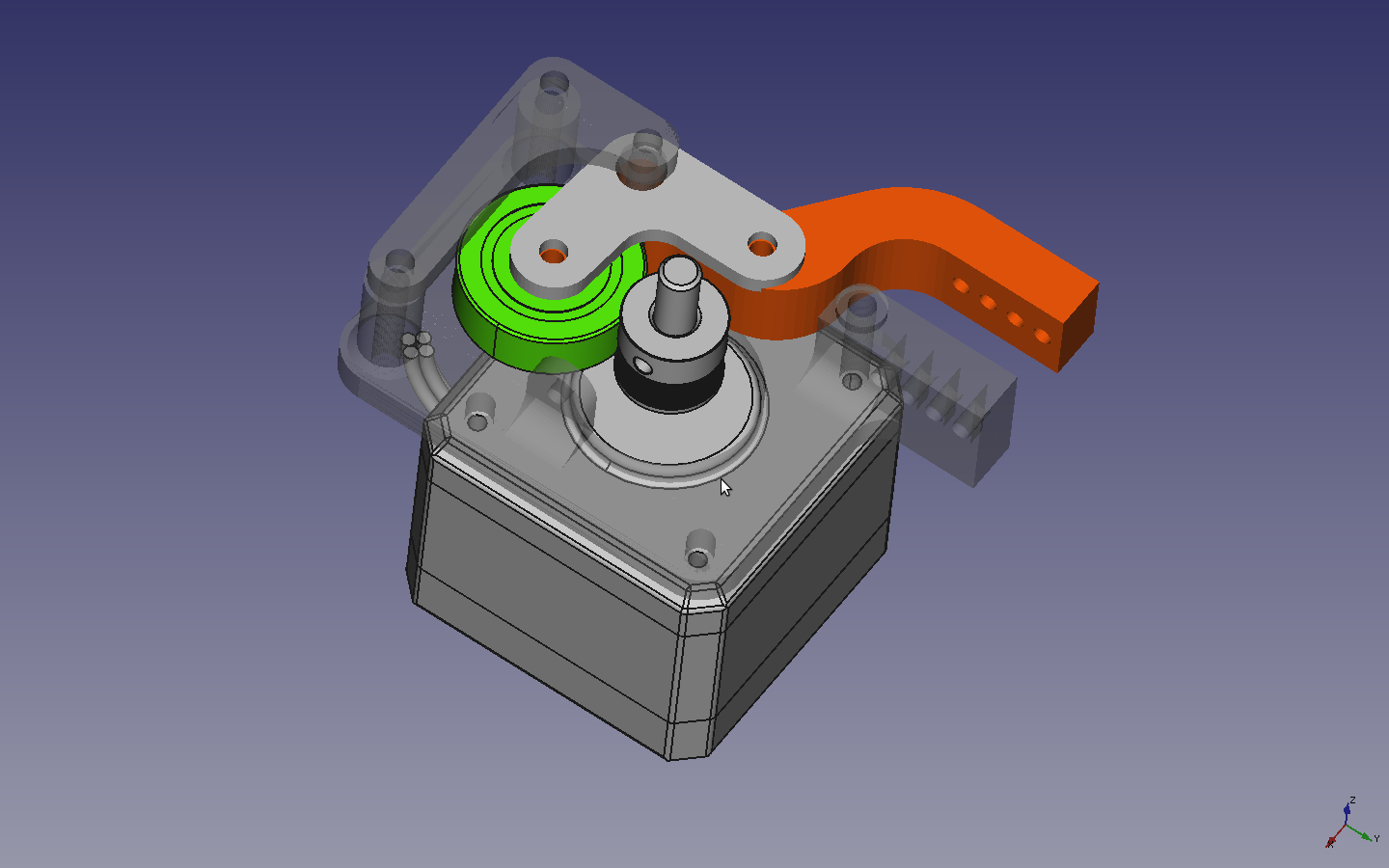 Here is the base with modifications: 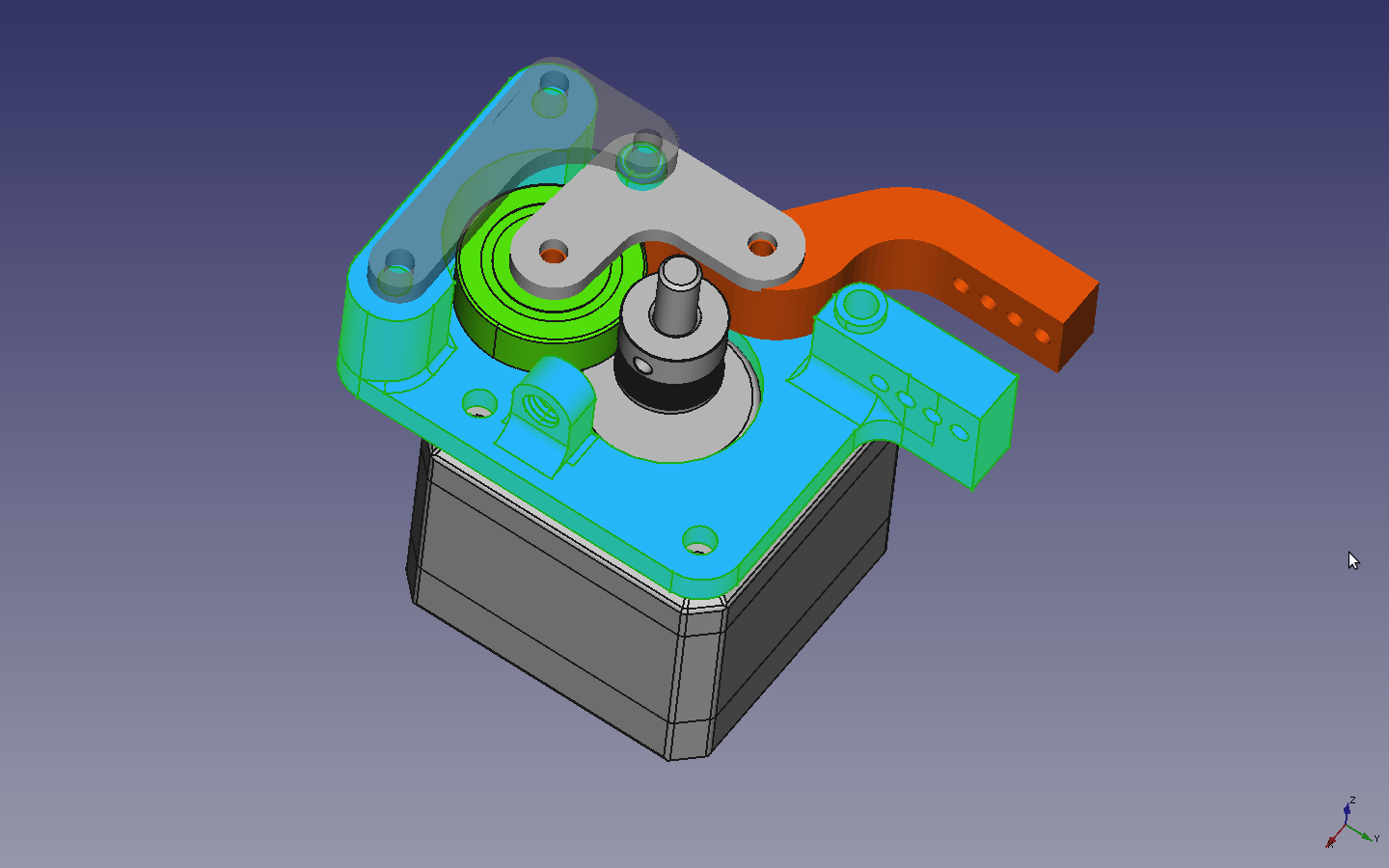 Initially, I had donated a spare MK7 hobbed gear that I had made for my Rockbot printer to the space for use on this printer;  but the short length of the MK7 gear caused some problems(which you can sort of see in the assembly drawing) The setscrew I used protruded from the wheel and was contacting the 608ZZ bearing.  Another issue  was with the wheel itself: it was a not my finest work.  The set screw hole overlapped the hobbed portion of the wheel. 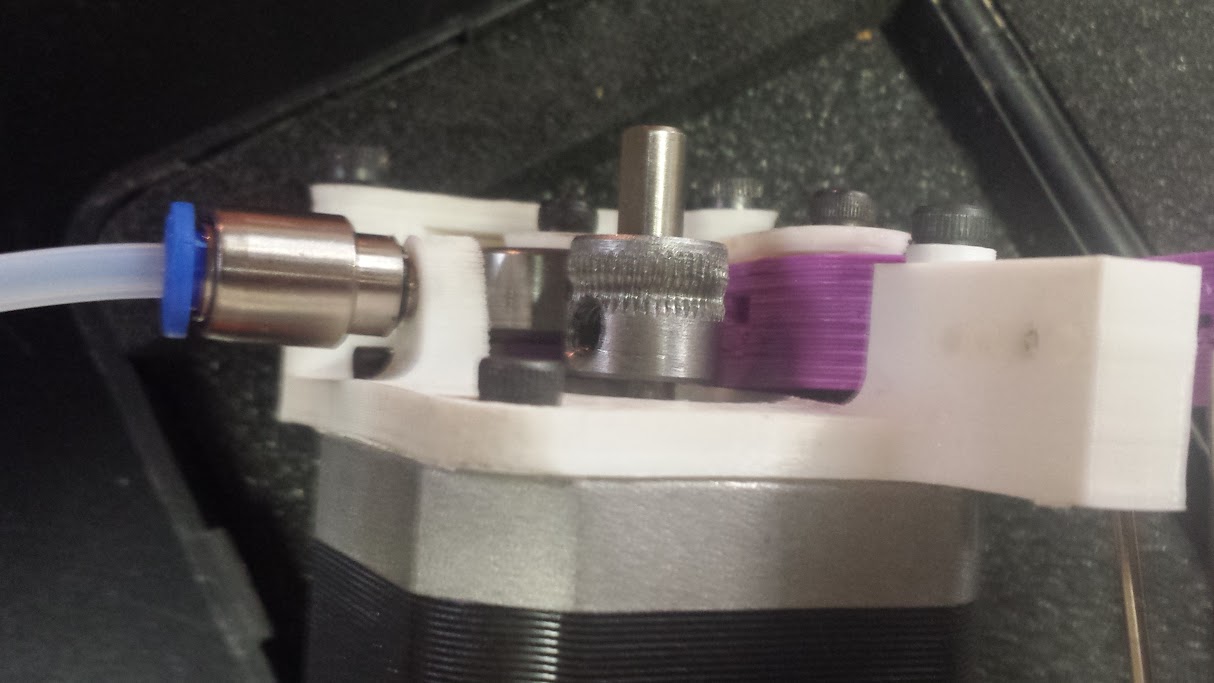 I set out to make a new one.
First thing I did was turned down a piece of bar from the scrap bin and sized the hole with a 5 mm reamer. 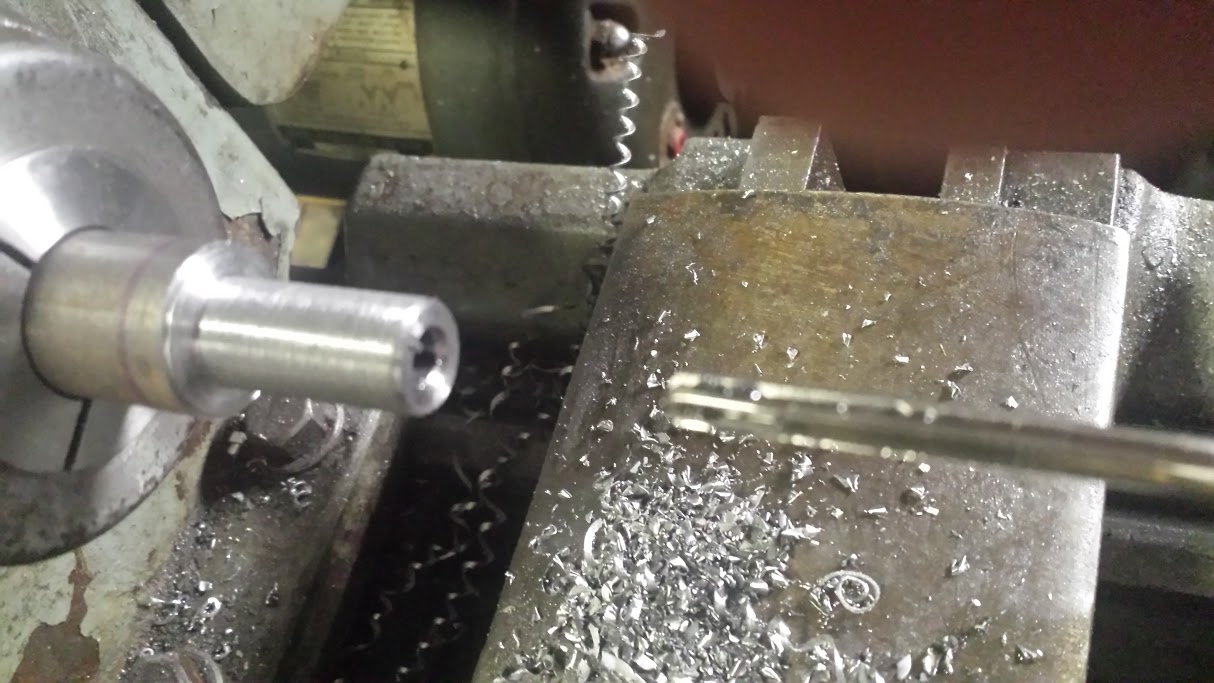 The blank was then mounted on the stepper motor and basically marked to where it should be hobbed. 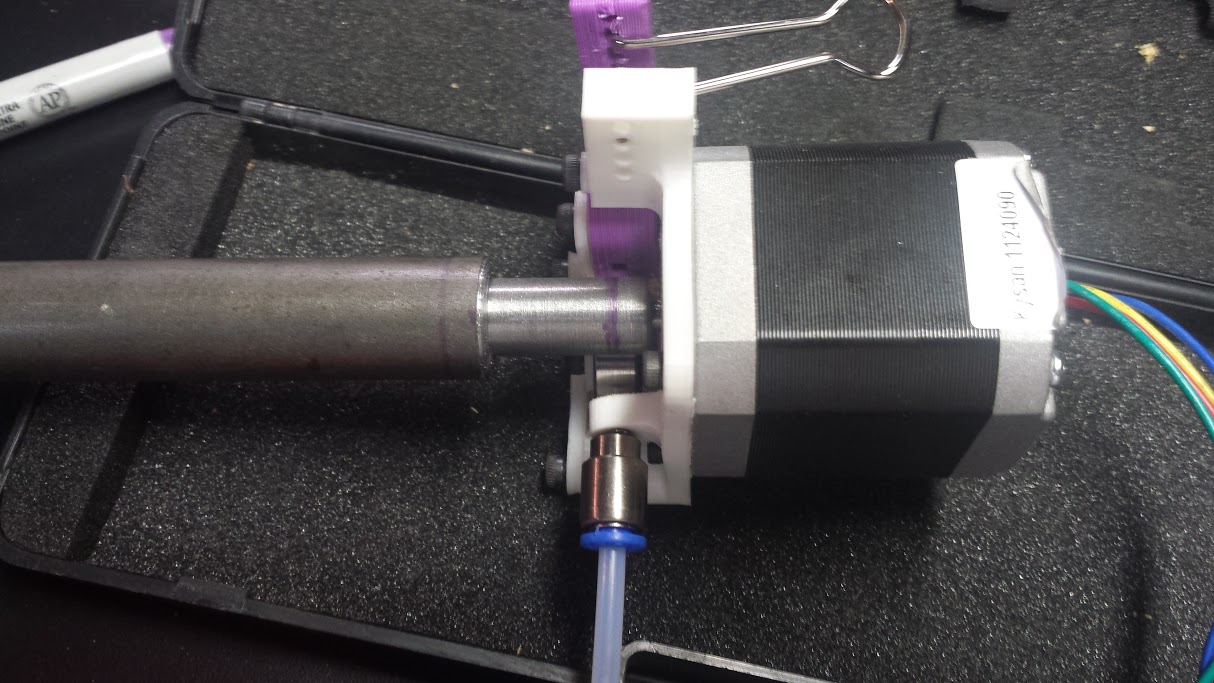 Next step was to hobb the blank using a spin indexer.  I used a 10-32 tap to do this and Unfortunately, I didn’t have a R8 collet of the correct size to grip the tap… So I put it in a drill chuck and hoped for the best, i.e.,  that the chuck wouldn’t get sucked out of the morse taper. 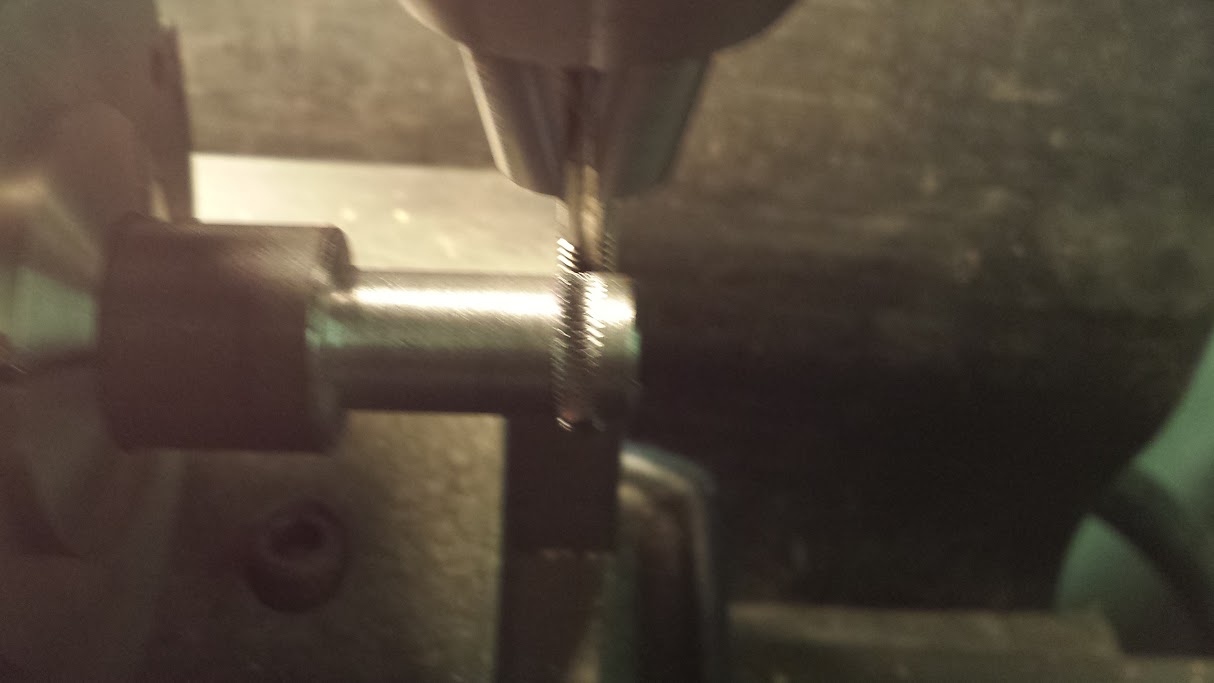 The spin indexer really does a nice job of hobbing with a tap and I was very pleased with the result.

After that the cross hole was center drilled, drilled and tapped. 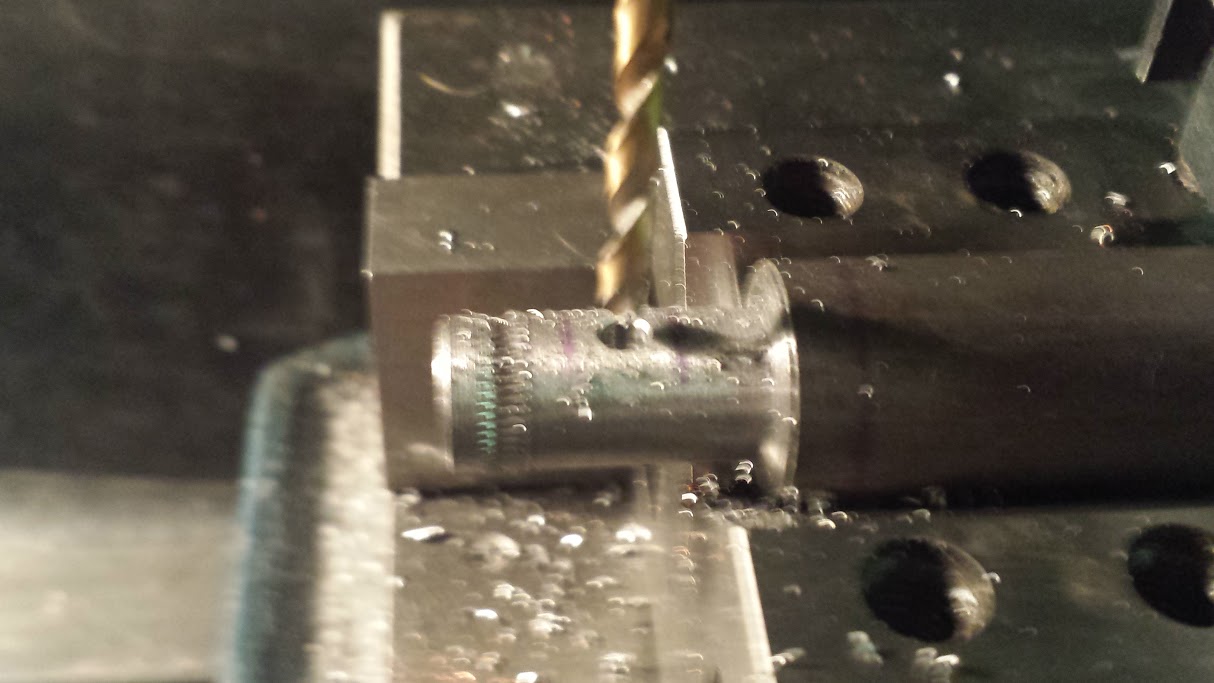 Afterwards, the part was cut off from the bar with a parting tool. 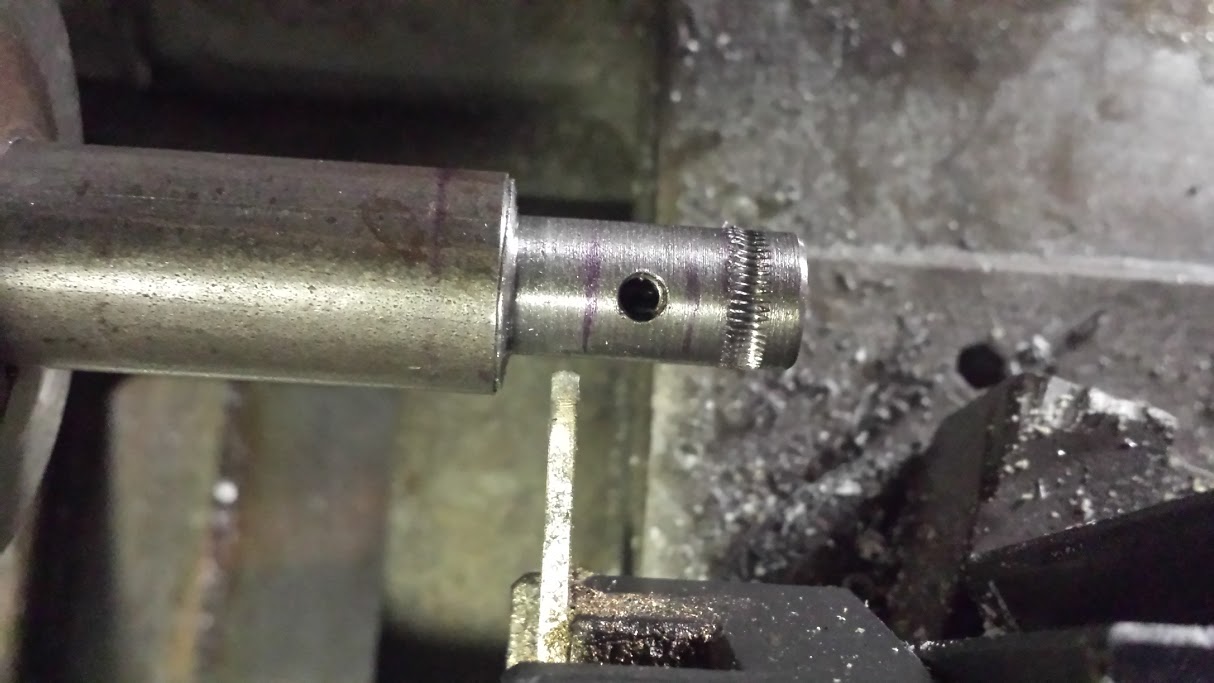 And here is an image of the finished unit assembled. 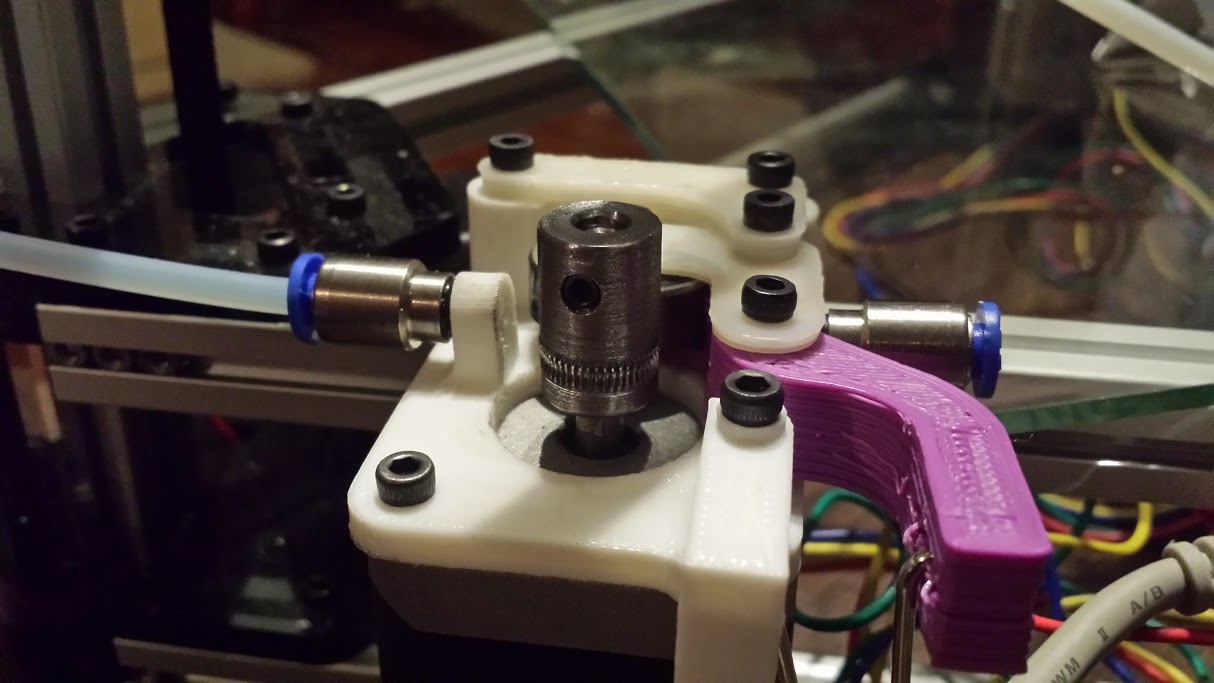 So far I’ve been exceedingly pleased with the performance of this extruder but there are a few things that need to be addressed before the mod can be considered done.

One issue that annoys me is that changing the filament is more difficult than it needs to be.  I was having difficulty getting new filament to feed through the tiny hole in the lever arm.   It seems like there is enough room to add some type of tapered pilot hole to help make feeding the filament a little easier.   Also, it seems that lever arm has split along the holes of the spring.   (This part was printed in our space’s original printer, a Makerbot Cupcake.  The Cupcake has seen better days so I’m thinking this separation was more of an issue with extrusion settings vs a design issue)  Even so, it should shouldn’t be too difficult to increase the strength around the holes slightly.

The modified design I created needed to have portions ground away with a Dremel tool for clearance.  I didn’t take into account how the the filament would push against the bearing.   (I was under some time constraints to get the printer ready for a STEM event I was attending, so I wanted to get this project operational vs perfect).  The model I had cloned was originally  drawn in metric, so was pretty easy to duplicate the nominal dimensions, but I will need to increase the clearance on the stepper motor pilot bore as well.

I’m also currently designing/building a custom Kossel Style Delta printer I’m calling the Wedgie. It’s a fun but slow-to-finish project for me at the moment.   It’s uses Kossel Clear proportions and rail arrangement as a starting point.   I’m adding some interesting features as well as incorporating the next iteration of the extruder design that was used for this printer.

The calibration of the Kossel Clear seemed like it was more painful that it should have been.  This is the first Delta style printer I’ve calibrated and it was a bit of learning experience.  I hope to share these insights in a future post.